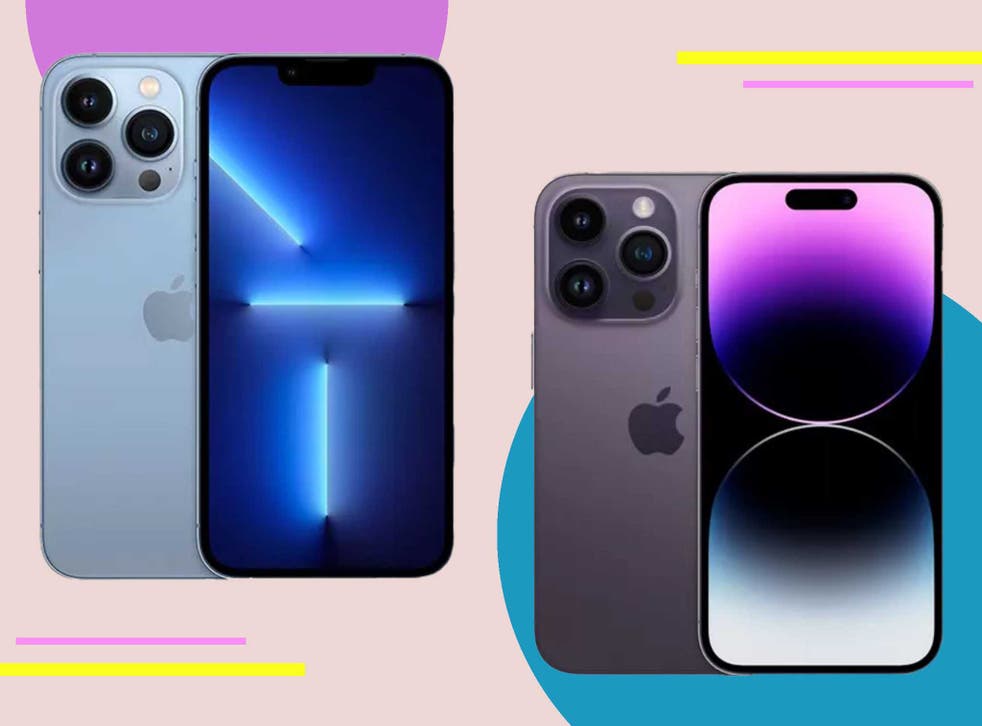 The iPhone 14 is here. And at first, it looks a lot like the iPhone 13 that came before it.

The new phones have the same basic design and colours, and when switched off could be mistaken for the iPhone they take over from.

However, when the phones are switched on, the changes become clear. While most of them are in the iPhone 14 pro models – which are more distinct from the non-pro models than they have been in previous years – there are a number of important changes all around.

Here’s everything that’s changed between the iPhone 13 and iPhone 14, as well as between all the various versions of Apple’s latest handset.

Register your interest for the iPhone 14 here

Many of the changes Apple has released to the iPhone line-up come to all of the iPhone 14 models, whichever you buy. While you can find a detailed rundown of the differences between the various iPhone 14s below, here’s how the new phones stack up with their predecessors.

One of them will be obvious before you turn it on: in the US, the phones don’t have SIM trays on the side anymore, and will rely on eSIMs instead, which can be set up through the phone itself. That means you won’t need to fiddle with a small paperclip to pop out the tray and insert a piece of card, and it will also tidy up the side of the phone.

All of the phones also have new satellite features – though again they are only available in the US and Canada for now. They mean that the phone can find satellites in the sky and use them for connections when you are out of wifi or cellular range.

Read more: Here’s where to pre-order all the new Apple smartwatches in the UK

Another security feature comes to the new phones: crash detection. Using new hardware, the phone can detect if you are an in an extreme car crash, and contact emergency services. (This is also available in the new Apple Watch.) Almost everything else stays the same: the display, the chip, and much else besides.

It’s the iPhone 14 pro that really gets new features when compared to the older iPhone 13 and 13 pro.

The differences between the normal iPhone 14 and its pro sibling are big this year. In previous years, it has just been a matter of an extra camera lens and some other small features. But this year, the whole way you use the phone is different.

All of the big differences between the 13 and the 13 pro are still in the new models. As with last year, only the pro gets the variable refresh rate display – which means that movement looks smoother, among other things – and the pro has a slightly longer battery life.

Just like in previous years, perhaps the main big difference between the two phones is still the camera, and that difference is even more stark. The pro has an extra lens, as ever, but that extra lens is dramatically improved, offering four times the megapixel count of the non-pro phone, and is said to take much better pictures.

Read more: The iPhone 13 and 13 mini have blazing-fast performance and immaculate design

And like always, the iPhone 14 opts for more bold colours while the pro sticks with more classic tones. The standard iPhone 14 comes in a bright red and light blue, among others; the pro is available in gold, silver, black and a new "deep purple" that is so intense it hardly looks purple at all.

However, in an extra development this year, Apple has made two big extra changes between the pro and non-pro phones. They relate to its display and its processor.

The latter is simple: the iPhone 14 has the same chip inside as the iPhone 13, the A15. That is probably plenty fast, but the 16 is even speedier, as you might expect.

The most obvious changes come on the screen. The iPhone 14 still has a notch, where the iPhone 14 pro has a smaller cutout at the top of the display, and the extra space is used for a new kind of notification that should make navigating between the phone quicker. The iPhone 14 pro also has an always-on display, meaning that notifications and other information will be showing at all times.

There may be four phones this year, but there are two sizes: big and small. Unlike previous years, the differences in size between the two phones is simple: the iPhone 14 and iPhone 14 pro have 6.1in screens, and the plus and pro max have 6.7in screens. (The "mini" size has been swapped for the larger iPhone 14.)

The other straightforward thing about the iPhone 14 models this year is that the size differences are just that. The plus and max models are just bigger – nothing else.

In the past, the variations in sizes has also meant differences in features. Some of the pro max models have included better cameras than those in the pro, for instance.

This year though, the size is the only distinction. That doesn’t apply only to the screen, though the bigger size also extends to the battery, so you will get slightly more charge out of the plus and max models. (That’s roughly six hours of video playback more, Apple says.)

All of that means that you can choose your phone and then choose your size. It is worth thinking carefully about those size differences: the bigger models really are quite big, and can be too large to fit in many hands or pockets.

Keep your phones, tablets and game consoles in top condition with the best screen protectors